Carol moved to Costa Rica after visiting for many years and then started an eco-lodge at Cana Blanca. The locals began to drop off orphaned and injuried wildlife, and soon there was no time for guests.

In the early days, it was primarily an avian sanctuary. Then, after Poppy, the spider monkey arrived on October 29, 2003, the flood gates opened to all kinds of wonderful local critters. The sanctuary is currently home to a wide variety of orphaned and injured animals (about 70 non-human animal residents). The sanctuary is situated on the Golfo Dulce coast at Cana Blanca and is contigous with Piedras Blancas National Park. With the protection of Piedras Blancas, much of the original sanctuary property's 700 acres became part of the Park.

In the coming year we hope to complete the multi-purpose building, the animal kitchen and living quarters for the volunteers, researchers and employees. We are drawing up plans for grasshopper and rat breeding facilities, to provide live prey for the releasable animals that must learn to hunt to survive.

This work is only possible with your support. Please consider supporting us. Your donation will make a large difference in an animal's life. 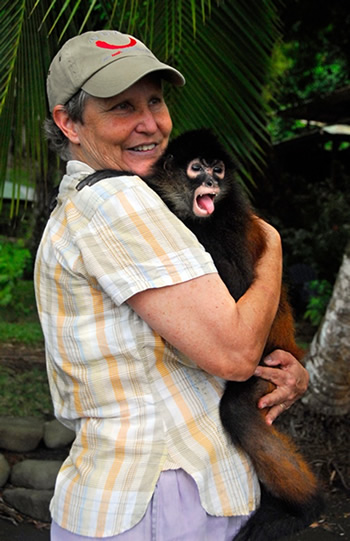 Boogie, the Tayra, came to us with low levels of calcium and was very 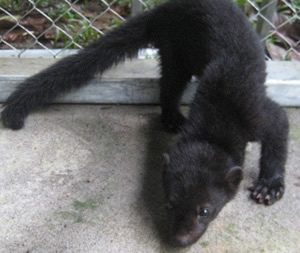 thin. Today he is healthy, but it is doubtful that he will be released. Boogie was born in captivity and chances are he has been imprinted beyond the capacity to rehabilitate, but we will continue to try

A car had hit Lilliana, the Black and White Owl. She was brought to the 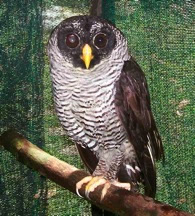 sanctuary with a broken wing and a damaged eye. We wrapped her wing, and could only give the eye time to see what would happen. We took the wing wrap off, her wing is good and it appears that she has lost some vision in her eye, but not enough to prevent us from releasing her. In preparation for release she will be going to a larger cage to strengthen her flight muscles.

Jazz, the baby Whitethroated Capuchin was turned in to MINAE by his “masters” complaining about him always biting. He hasn’t bitten any of 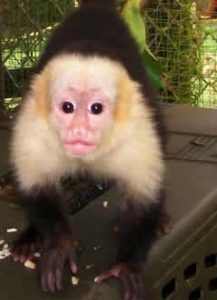 us; maybe because of the variety and abundance of food we feed him. He was extremely thin when he arrived. With some love, good food and quantities of milk formula, Jazz grew to a very healthy size. Jazz will never be releasable due to the territorial traits of the species. He has successfully been placed with the other capuchins in their new large enclosure and is enjoying being part of this family troop.

Lola, the Ocelot was taken from her mother to sell in the illicit pet trade. 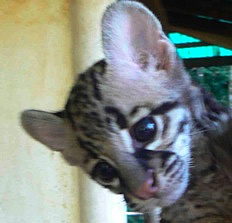 Gollo, an employee at the time, was approached to buy her and reported the incident to MINAE. She was confiscated the next day and sent to the sanctuary. She has adapted well to eating her calcium-fortified chopped heart twice a day and chewing on bones inside her lair. She is growing in leaps and bounds and loves to play “big cat” in the grass.

Tita, the baby Central American Squirrel Monkey was confiscated from 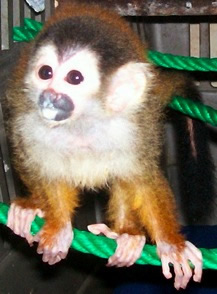 a home. She acclimated well to her new surroundings and diet during her quarantine to enable us to put her in the larger cage with Etilma and Katie. The two older “sisters” weren’t happy to share their space; she was terribly dominated not being allowed off the cage floor. We pulled her out with plans to attach a smaller cage to theirs allowing them to get to know her more slowly. When we move them to a larger cage we will once again try to put all three together.