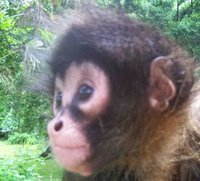 Winkie arrived at the Sanctuary last August tenth. She was found on the forest floor in the Lapa Rios Reserve when she was less than two days old.

Quick action by one of the lodge’s guides saved Winkie’s life. The guide heard the commotion of the mother and other monkeys in the trees close by and ran to the area to find a troop of coatis closing in to attack. Seconds later Winkie would have been food for the omnivores.

Today Winkie is developing much more rapidly than Poppy or Sweetie, possibly because her two older “sisters” are here to teach her. She is very independent going out in the trees to forage while swinging from limb to limb.
She is the epitome of good health, using many intrinsic behaviors during her daily activities and we see no reason why she won’t return to the forest when she is sexually mature in four to seven years.